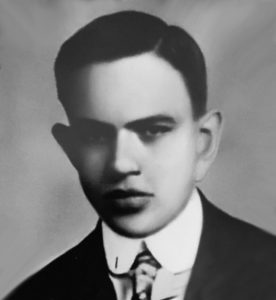 By 1906 the Hoggatt family had moved to Kansas City, Missouri, where Mr. Hoggatt was the president of the Domestic Mercantile Company which was located at 603 E. 12th St. In 1912, Mr. Hoggatt became the manager of the S.R. Garvin Reality Co. which was located in suite 331 of the Shukert building at 1115 Grand Avenue. By 1919, the company had become the Hoggatt Investment Company and sold town lots, land and oil leases. (Kansas City, Missouri, City Directories, 1900-1920)

The family lived at numerous addresses just east of downtown Kansas City until 1913, when they moved to the house at 1015 the Paseo. (Kansas City, Missouri, City Directories, 1900-1920)

Harry’s education was not well documented, but he did attend Hamilton Elementary School, (Missouri Secretary of State website: www.sosmmo.gov/archive/soldiers) which was located at 1516 Campbell, and he also attended Woodland Elementary at 711 Woodland for a portion of his sixth grade year in 1914. (Kansas City, Missouri School District)

The United States had been at war with Imperial Germany since April 6, 1917, and Harry volunteered for the Marines. The Marine Corps recruiting standards were so high that approximately 80% of applicants were turned away. (Devil Dogs: Fighting Marines of World War I) On May 22, 1918, Harry was accepted for enlistment at the Kansas City, Missouri Receiving Station and shipped by train to the Marine Barracks at Parris Island, South Carolina where he arrived on May 27, 1918. Harry had to get two waivers from the Marine Corps to be able to enlist; the first was for only being 17 years old and the second was for being under weight. (Harry Hoggatt Service-Record Book)

The first step for enlistees was to be put into quarantine upon arriving in South Carolina. (Devil Dogs: Fighting Marines of World War I) Harry got out of quarantine on June 3, 1918 and officially signed his enlistment papers on that day, obligating him to service for the duration of the war. Harry was issued Marine Corps Serial Number 120042. The physical Harry took reports that Harry had brown eyes, auburn hair, a fair complexion, stood 5 feet 9 3/4 inches tall, and weighed 125 pounds. (Harry Hoggatt Service-Record Book)

Harry was in boot camp from June 3, 1918 through July 24, 1918, training in Company K at Marine Barracks, Parris Island, South Carolina. As was the case during his entire career, he was rated Very Good to Excellent in the categories of Military Efficiency, Obedience, and Sobriety; he had no offenses on his personal record and he was rated as having excellent character. On July 19, 1918, Harry shot 203 at the range and qualified as a Marksman. His rifle serial number was 463873. (Harry Hoggatt Service-Record Book)

After completing boot camp, harry was first assigned to Company b, 5th Separate Battalion at the OS Depot at Quantico, Virginia on July 24, 1918. (8) This battalion was one of several replacement battalions formed during the war to provide additional training and organization to units going overseas. . (Devil Dogs: Fighting Marines of World War I)

The 5th and 6th Marines regiments and the 6th Machine Gun Battalion made up the 4th Marine Brigade, which was newly formed in late 1917. The 4th Marine Brigade was made part of the fledgling 2nd U.S. Army Infantry Division. The Marines were forced to be part of an Army division since John J. Pershing refused to allow enough Marines in Europe for a division of their own. (Devil Dogs: Fighting Marines of World War I) Because the Marines had been incorporated into an Army division, Harry Hoggatt was issued Army Serial Number 4,606,267. (Missouri Secretary of State website: www.sosmmo.gov/archive/soldiers)

The fact that Marines were even in Europe ran counter to the wishes of Maj. Gen. John J. Pershing, commander-in-chief of the American Expeditionary Forces. Pershing was forced to accept Marines after political influence in Washington to have the Secretary of War Newton d. Baker persuade President Wilson to order that a regiment of Marines be sent for duty with the first elements of the AEF going to France. This first contingent of Marines was the 5th Marine Regiment. While having to accept Marines in the AEF, Pershing for some time merely relegate them in small units to perform support functions in England and on the continent. The also underwent a considerable amount of training under French and British officers in the elements of ‘trench warfare’, as it was being conducted by the armies of those two countries. If Pershing had only one saving grace it was his determination throughout the war to abide by American policy as set by himself and President Wilson to not allow American units to be broken up piecemeal and turned over to French and British commanders to be incorporated into their unites as replacements for the losses of men that they had partly inflicted upon themselves by their use of poor tactics. (Devil Dogs: Fighting Marines of World War I)

Harry received more training in France until he was finally transferred as a replacement to the 79th Company, 2nd Battalion, 6th Marine Regiment on September 11, 1918. (Harry Hoggatt Service-Record Book)

On September 2, 1918, the 2nd Division was given orders to move to the area of the St. Michael Salient. After arriving in the area, the 2nd Division received orders on September 8, 1918, to take over the Limey sector on-half kilometer east of Remenauville. The final position placed the 2nd Division on the left flank of the I Corps sector. (Devil Dogs: Fighting Marines of World War I)

According to a letter that Harvey Hoggatt wrote to the Secretary of War, Newton D. Baker, on November 12, 1918, Harry and his brother Ralph met just after the St. Mihiel had ended and were able to spend four days together. This was Ralph’s first knowledge that his younger brother Harry was in France, and was the first time they had seen each other in three years. (Harry Hoggatt Service-Record Book)

The Marines spent the next two weeks refitting and moving into position to take part in the offensive in the Champagne region of France. During this time, John Lejeune had volunteered the 2nd Division to take Mont Blanc. He did this because he believed that the 2nd Division was about to be broken up. It turned out that there was no such plan afoot, but the French leaped at the chance to accept Lejeune’s offer. (Devil Dogs: Fighting Marines of World War I)

On the night of October 1st and 2nd, 1918, the 2nd Division moved into the line in preparation for taking part in the offensive near Mont Blanc. On October 2nd, the 2nd Division was next engage in clearing out trenches in preparation for the main assault the next day. The French on either flank were not successful in clearing the trenches in their sector through. This led to serious problems the next day the main offensive began. On October 3rd, the 79th and 80th companies of 2/6 led the 4th Marine Brigade attack, which had problems all day because of an exposed left flank. Significant gains were made but could not be fully exploited by the 4th Brigade. The 5th Marines were unable to make a planned attack late that afternoon as a result of their spending the day having to protect the 6th Marines left because no French who should have been there could be found. (Devil Dogs: Fighting Marines of World War I)

On October 4th, the 6th Marines, with 2/6 still in the lead, made several attempts to drive the Germans off Mont Blanc Ridge, but these were unsuccessful partly because the 4th Brigade’s left flank was still exposed. Meanwhile, the 5th Marines made an assault toward the town of St. Etienne. This assault had very high casualties and also did not meet its objective because of the weak support from the 3rd Brigade on that right flank; the 5th Marines were pulled out of the fight later that night.

The 6th Marines again were leading the assault on Mont Blanc Ridge on October 5, 1918, when Harry Hoggatt was killed in action by enemy rifle fire. (Devil Dogs: Fighting Marines of World War I)(Harry Hoggatt Service-Record Book) The events were described to Mr. Hoggatt in a letter from his son Ralph who had been taking part in the battle as a corpsman assigned to the 5th Marines.

“This is the hottest fight we have seen. At one time we were surrounded on three sides. We were in the open and the enemy in the woods. We got machine guns bullets and high explosives. All one could do was walk into the open and hope for the best. We lost many mighty fine boys, including brother.” (Harry Hoggatt Service-Record Book)

A dispatch dated November 8, 1918, from Headquarters Marine Corps, informed Mrs. LeliaHoggatt that a cablegram had been received stating Harry Hoggatt was killed in action on October 5, 1918. (Harry Hoggatt Service-Record Book)

The Hoggatt family was not notified until later but Harry was disinterred and reburied on June 5, 1919 in Grave 105, Section 50, Plot 3, Argonne-American Cemetery, Romagne-sous-Montfaucon, Meuse, France. In a letter dated May 17, 1920, the Hoggatt family was informed that removal of American dead from this sector for shipment home would commence after the fifteenth of September that year. Up until that time, they had expressed that Harry be buried at Arlington. (Harry Hoggatt Service-Record Book)

The Hoggatt family responded to the May 17, 1920 letter with a desire that Harry’s remains be returned to Kansas City. Harry was disinterred on June 13, 1921 and his remains arrived at Hoboken, New Jersey on August 1, 1921. His body arrived on the S.S. Cantigny from Antwerp, Belgium. His remains were transported to Kansas City where he was interred on August 13, 1921. Harry Hoggatt is buried in Forest Hills Cemetery in Block 3, Lot 20, Space 5. The Marine officer in charge of the detail assigned to Harry’s internment reported that the funeral services were held at 2:30 p.m. at the Carroll & Mast Chapel, the burial was held at 3:30 p.m., and that approximately 2,500 people attended. (Harry Hoggatt Service-Record Book)

Before his death, Harry Hoggatt served in the 4th Marine Brigade with four future Commandants of the Marine Corps:

General Lejeune, as the first Commandant of the Marine Corps League, signed the charter for the Simpson-Hoggatt Detachment (984) of Kansas City, Missouri on June 1, 1925. The detachment was named for James Simpson Jr. and Harry Hoggatt, two Kansas City Marines who were killed in action during World War I. James Young Simpson Jr, also served in the 6th Marines and was killed June 6, 1918 at Belleau Wood. Although the Simpson-Hoggatt detachment is still active, the detachment donated their original charter to the Marine Corps Archives at Quantico, Virginia because of the historical significance of it being signed by John Lejeune. the charter was presented to the Archives on August 9, 2007.

© Copyrights 2019, Simpson-Hoggatt 984, All Rights Reserved. Powered by RankedBrain.com.
Sign in Create an Account
Lost your password?
Translate »
Select the fields to be shown. Others will be hidden. Drag and drop to rearrange the order.
Click outside to hide the comparison bar
Compare
Shopping cart close